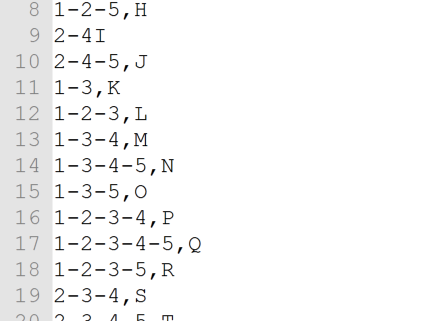 Recently, at the inaugural BSides Edinburgh, Ben Turner and I made the trek up to Edinburgh to see our colleague Neil Lines present his talk “The Hunt for The Red DA”. I can’t say that I am a massive fan of such early starts (we jumped on the first flight out of Birmingham), but thankfully the organisers made the trip absolutely worth it. The talks that I saw were well presented and had good technical content while the venue was absolutely amazing. I even learnt some stuff about the world of IoT that I wished I didn’t know; cheers Ken.

The conference was very well supported by the sponsors, particularly with the solid training on offer. We even recognised the faces of some of the competition from the CTF at DerbyCon. We’re really looking forward to doing battle again later in the year…

SecureWorks kindly created a challenge for the BSides Edinburgh 2017 audience; they named it the Crypto Contest. Personally, I think one of the core skills as a good penetration tester is being able to quickly deal with data that are you are unfamiliar with and to have a good set of tools that can parse & process in a flexible way. The contest was a good way to practice some of those skills and demonstrate to my colleagues why pure C# in the world’s best programming tool – LINQPad is better than Powershell 😉 Plus, there were some very cool prizes on hand; our eyes quickly zoned in on the Hak5 Bash Bunny.

Navigating to https://www.secureworks.com/~/media/Files/US/Blogs/bsides%20edi%2017/square.ashx, we got the following wall of text 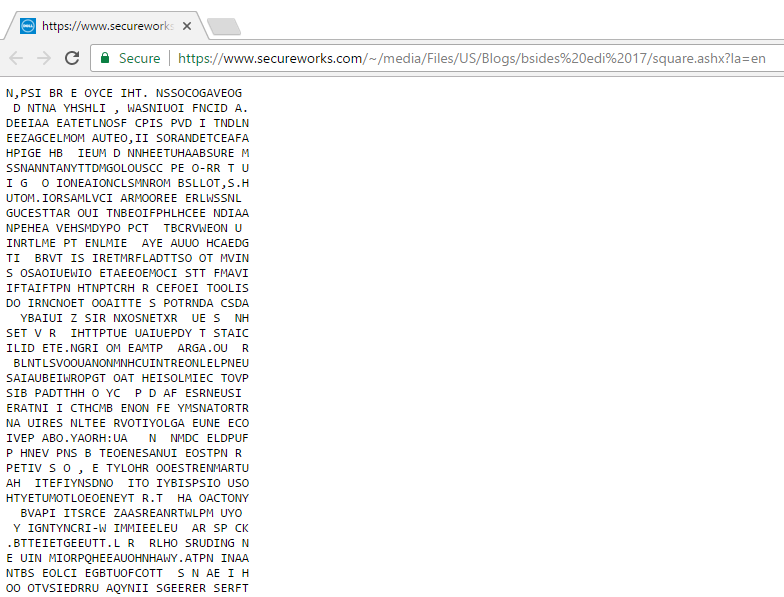 Now credit for this goes to Ben; after trying some advanced military grade cryptographic techniques such as ROT13, he craned his neck and quickly spotted that this was in fact just rotated text. Yep, I was massively over thinking it too! All we had to do was quickly put together some code that would rotate the text 90 degrees around the origin. Firing up LINQPad, the following solution was created (which of course has been tidied up and comments added).

The following out is produced and the flag is ours: 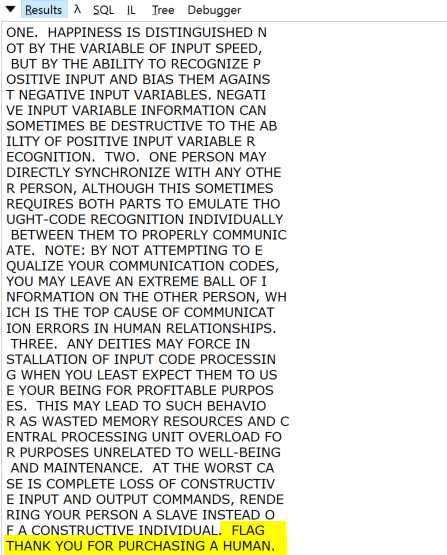 Sure, we could have put the monitor on its side, but where’s the fun in that?

Opening the page https://www.secureworks.com/~/media/Files/US/Blogs/bsides%20edi%2017/royale.ashx?la=en, you got the following, which was immediately recognisable as Morse code. The instructions stated you need to “Please decode the following message, adding appropriate spacing as needed so the flag is readable.”

Funnily enough, I had never worked with Morse code before, but the first thing I noticed was that thankfully Secureworks had put in spaces between prosigns, which made the code a little easier. The first step was to obtain a Morse code library, one that would translate the symbols to letters. This was pretty easy to find with Google and allowed me to build up a CSV file which looked something like this: 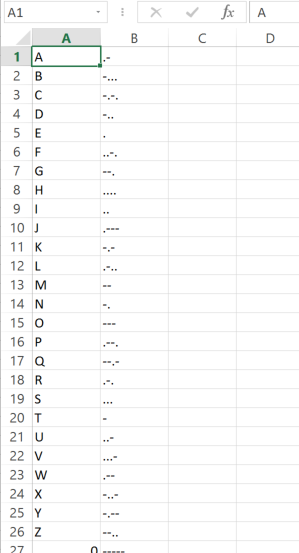 Once again, using LINQPad, the following code split up all the symbols, translate each one and then coverted it all into a string.

This gave us the following result, which is written in the NATO phonetic alphabet.

So, a slight tweak to the code, changing the last line to:

…and the next flag was ours:

For challenge 3, https://www.secureworks.com/~/media/Files/US/Blogs/bsides%20edi%2017/dreams.ashx?la=en, we received the instructions “Decipher the message from this transmission” and then the following: 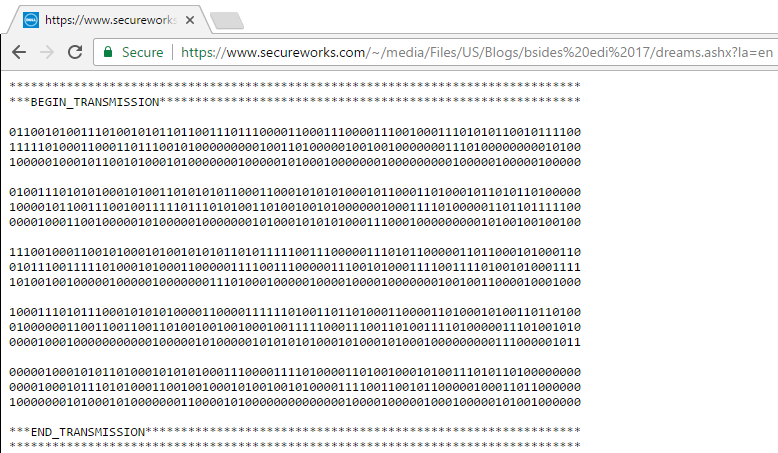 The first calculation was the size; the 5 lines contained 1200 bits (150 bytes). Assuming bytes was our first mistake; this had us trying to convert to different text forms and every kind of data type that we could think of, without any luck. Being bits, we then tried creating images types, e.g. bitmap and even QR codes (which in fairness didn’t really align to the size). The path then led to 6 bit characters because, well, 1200 divides by that very nicely. In honesty, we should have looked more into that first, but we didn’t as there was a talk we wanted to see (honest :)).

So, we were back inside the vendor area when the following tweet arrived.

Feel it out… hang on… Braille uses 6 bit characters, right? Bingo! Straight to https://en.wikipedia.org/wiki/Six-bit_character_code#Example_of_six-bit_Braille_codes to look at the Braille glyphs:

The 2×3 column structure lined up very nicely with the text in the transmission. Cool, so time to bash some code out. By this stage, you can probably guess what tool was opened up 🙂

The first step was to once again create a dictionary file that would translate the glyphs to ASCII. For this, we borrowed the text from the wiki page and built a csv file translating the positions into a letter. It looked like this: 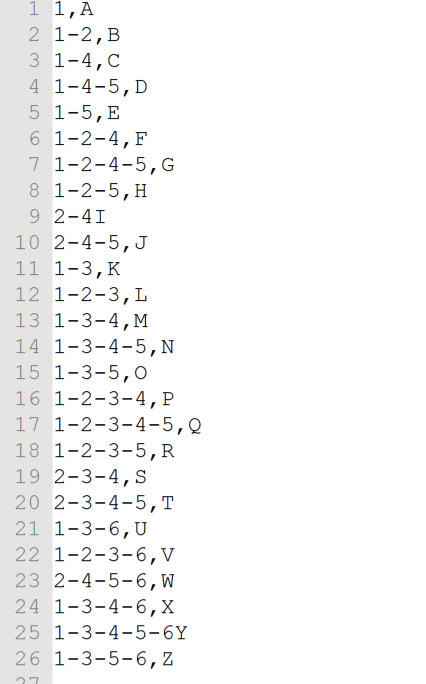 Next was to write some code that translated those positions into characters. We bashed out the following quickly (it’s not perfect but did the job):

We get the following output; there were a couple of manual corrections that we needed to make to get the flag, but it looked like the Bash Bunny might be ours. 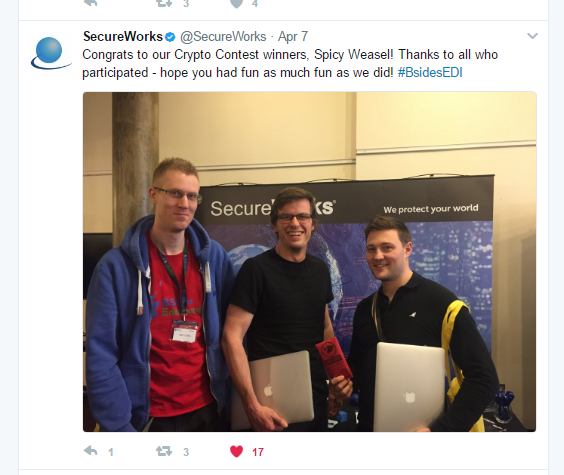 While not a Crypto contest in the strictest sense of the word, it was still a lot of fun and we got some practice with data formats that we don’t normally come across. As I said at the start, this is an important skill. A big thank you to SecureWorks for putting the time in to create this contest – we really enjoyed it and we hope you all enjoyed our write up! 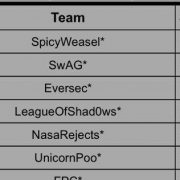 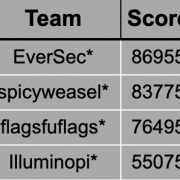 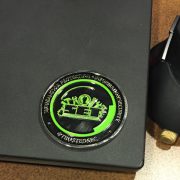 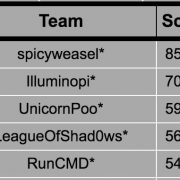 My Tweets
A quick analysis of the latest Shadow Brokers dump 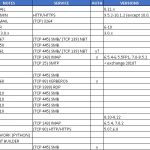 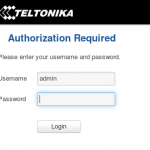