You are here: Home / Altiris

During a recent red team exercise, we discovered a vulnerability within the latest versions of the Symantec Management Agent (Altiris), that allowed us to escalate our privileges.

When the Altiris agent performs an inventory scan, e.g. software inventory scan, the SYSTEM level service re-applies the permissions on both the NSI and Outbox folders after the scan is completed.

The permissions applied grant the ‘Everyone’ group full control over both folders, allowing any standard user to create a junction to an alternative folder. Thus, the ‘Everyone’ permission is placed on the junction folder, enforcing inheritance on each file or folder within this structure.

This allows a low privilege user to elevate their privileges on any endpoint that has Symantec Management Agent v7.6, v8.0 or v8.1 RU7 installed.

When performing red team engagements, it is common to come across different types of third party endpoint software installed on a host. This type of software is always of interest, as it could be a point of escalation on the host, or potentially across the environment.

One example of endpoint management software we’ve often seen is Altiris by Symantec. This software is an endpoint management framework that allows an organisation to centrally administer their estate to ensure the latest operating system patches are applied, to deliver software, to make configuration changes based on a user’s role or group, and to perform an inventory asset register across the entire estate.

The version that this was tested by Nettitude was version 7.6, as shown throughout this release, however it was confirmed by Symantec on 12 June 2018 that all versions prior to the patched version are affected by the same issue. 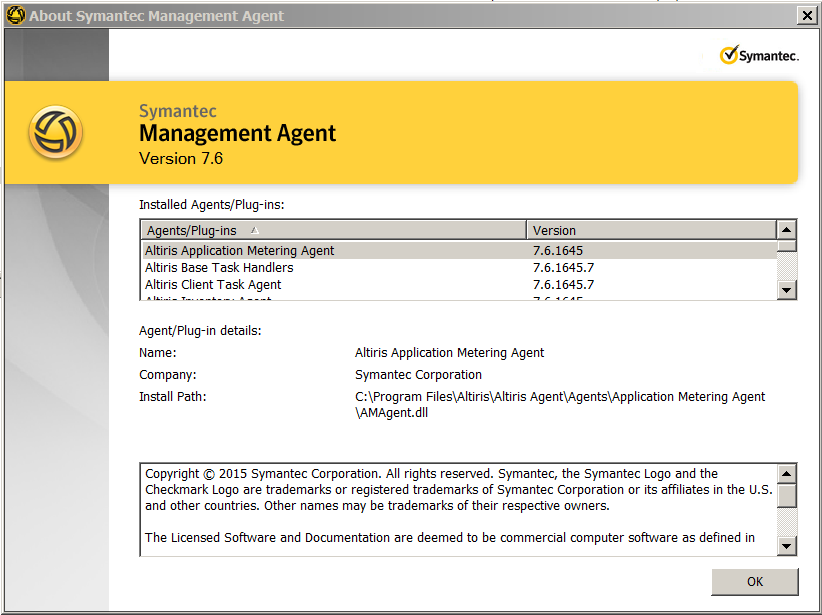 We noticed that folders within the Altiris file structure had the ‘Everyone – Full Control’ permission applied. These folders seemed to contain fairly benign content, such as scan configuration files and XML files, from what we believed to be the inventory scan or output from a recent task. These folder and file permissions were found using a simple PowerShell one liner which allowed us to perform an ACL review on any Windows host, using only the tools on that host. An example of this one liner is as follows:

When reviewing the timestamp on these folders, it appeared there was activity happening once a day within this folder. After doing further research into the folders, we concluded that these files were likely modified after a system or software inventory scan. Now, depending on the relevant organisations configuration and appetite for inventory management, this may happen more or less than once per day.

Here’s where the fun begins. Having ‘Everyone – Full Control’ permissions on a folder can be of great interest, but sometimes you can go down a rabbit hole that leads to nowhere, other than access to the files themselves. Nevertheless, we jumped headfirst down that rabbit hole.

It’s worth noting that once we found this behaviour, we went back to a recent vulnerability disclosure against Cylance (awesome post by Ryan Hanson incoming) to see if this type of attack would be possible here:

Here is the folder permissions that we identified on the ‘NSI’ folder. These permissions were also the same on the ‘Outbox’ folder.

We then attempted to redirect the folder to another location using James Forshaw’s symboliclink-testing-tools to create a mount point to another folder and see if those files were written, which was successful. It was also possible to use the junction tools from sysinternals (https://docs.microsoft.com/en-us/sysinternals/). The only problem with the sysinternals junction tool is that it requires the source folder to not exist, whereas in our case the folder was already there with ‘Everyone’ permissions. An example of this is shown below: 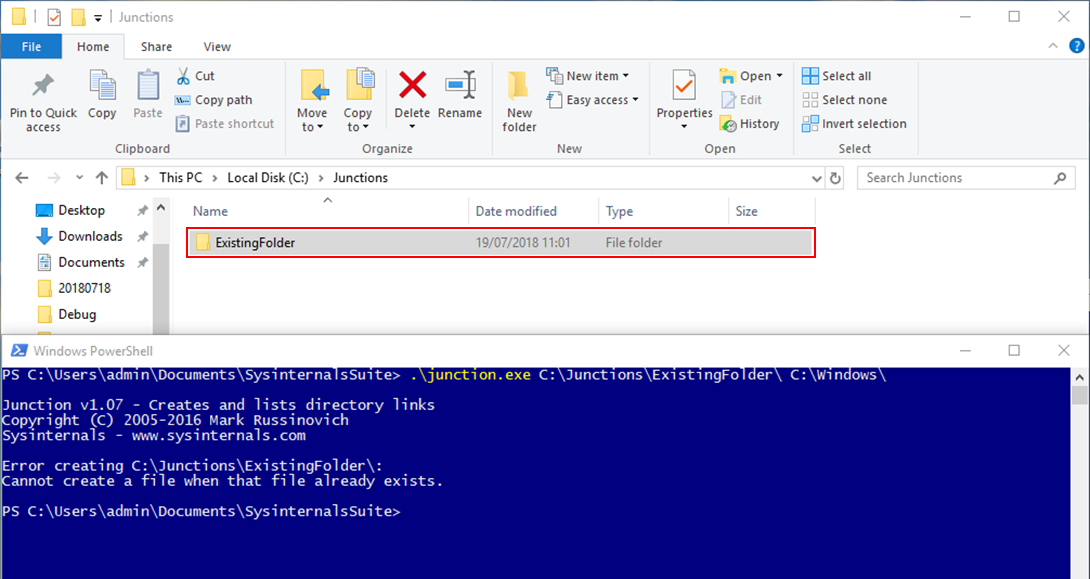 If we were to completely delete this folder we would not have the correct permissions to recreate this attack. James Forshaw’s toolkit allows the existing folder to be overwritten rather than starting from scratch, as shown below: 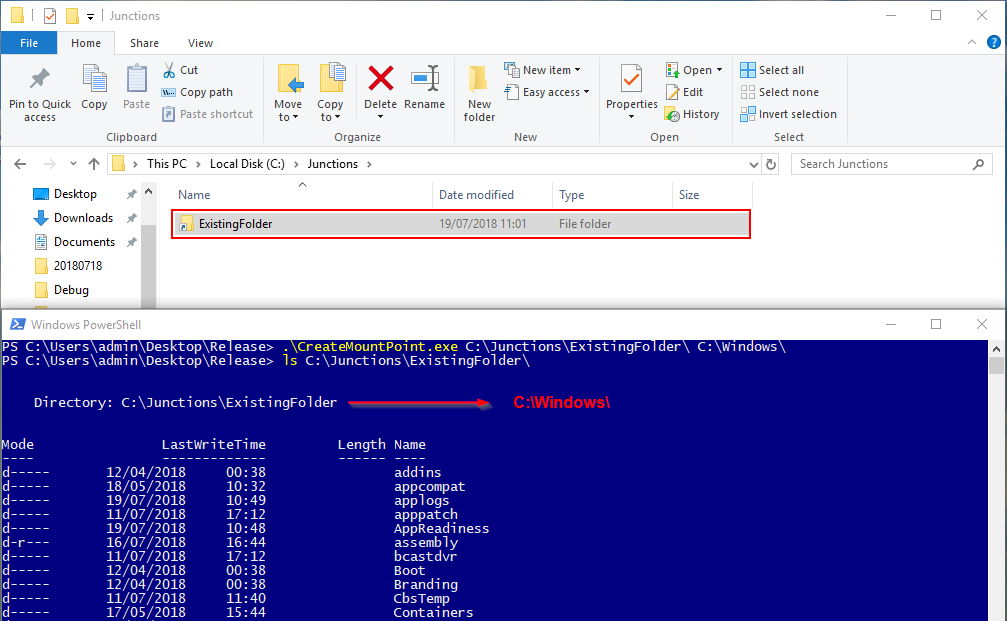 Another tool that could be used for this type of attack is called mklink.exe from Windows, but this requires elevated privileges, which would not have been possible in this situation (the point is that we’re attempting to gain elevated privileges).

To completely understand what process was overwriting these permissions, we uploaded Process Monitor from sysinternals (https://docs.microsoft.com/en-us/sysinternals/) to see what was going on under the hood. As you can see from the output below, all files and folders were getting a DACL applied by the AeXNSAgent.exe.

So how can we weaponise this? There are multiple ways you could choose to make this vulnerability exploitable, but the path of least resistance was trying to override the entire root Altiris folder (“C:\Program Files\Altiris\Alritis Agent\”) permissions so that we could modify the service binary running under the SYSTEM account, namely AeNXSAgent.exe.

The following screenshots show the permissions applied to the ‘Altiris Agent’ folder and the AeNXSAgent.exe service binary, before modifying the mount point to overwrite the permissions:

We then created a mountpoint which points to the folder ‘Altiris Agent’. It’s worth noting that this folder must be empty for the redirection to be possible. Since we have full permissions over every file, this was trivial to complete. The mount point was created and verified using James Forshaw’s symboliclink-testing-tools.

We then waited for the next scan to run, which was the following morning, and the next screenshot shows the outcome. As we expected the ‘Everyone – Full Control’ permission was applied to the root folder and everything under it, including the AeNXSAgent.exe.

Once we had full control over AeXNSAgent.exe we could then replace the service binary and reboot the host to obtain SYSTEM level privileges. It is worth noting that privilege escalation vulnerabilities in symlinks are fairly common and James Forshaw himself has found well over twenty as shown here:

This vulnerability affected all versions of Altiris Management Agent, namely up to v7.6, v8.0 and 8.1 RU7. We strongly recommend you apply all patches immediately.

If you have more ideas about exploiting this or similar vulnerabilities on run-time and/or in other ways, then please share them with the community and let us know your thoughts.