Nettitude are disclosing three vulnerabilities discovered as part of a security assessment on board a superyacht. These vulnerabilities have now had patches published by the vendor, and an appropriate time period has elapsed to allow for a patching window aboard the vessels.

The JETSELECT application is supplied by JetStream, a technology company specialising in the provision of various IT services to the yacht industry. Further details on the product can be found here:

During installation of the JETSELECT application, an installation script is run.  It writes a copy of the master password to a .bak file stored on the filesystem.

As can be seen in the screenshot below, the CONFSFC variable is assigned to /JetSelect/SFC/resources/sfc-general.properties.

This installation script was located in /home/bondit/jsl/3passchange.sh 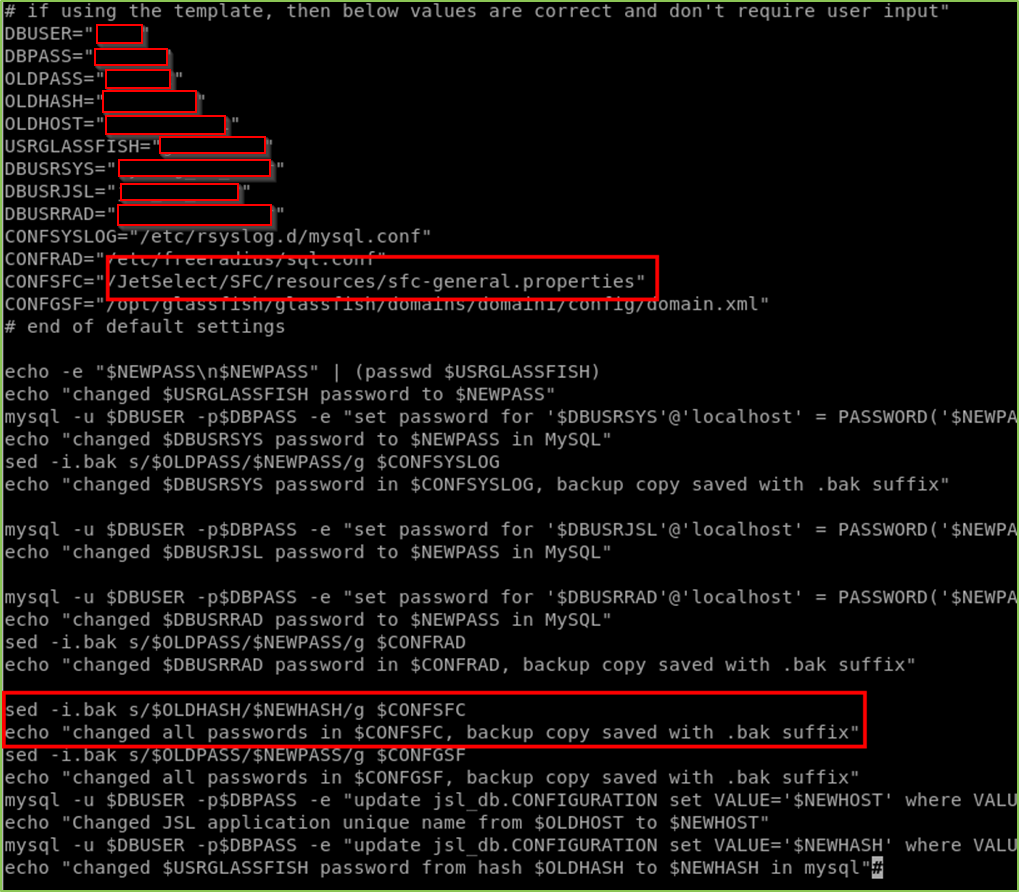 It is possible for any low privileged user on the system to view this directory, rendering any protections that may be provided by the MySQL database or salting to be ineffective.

Nettitude continued to probe the application, eventually gaining access to the JAR class ENCtool.jar referred to in the installation script, which is responsible for encrypting and decrypting data.

After obtaining a copy of that file, Nettitude decompiled the application and gained access to the source code. Examination of the source code revealed that the algorithm responsible for generating secure password hashes was simply a XOR function followed by Base64 encoding the output, as shown below. 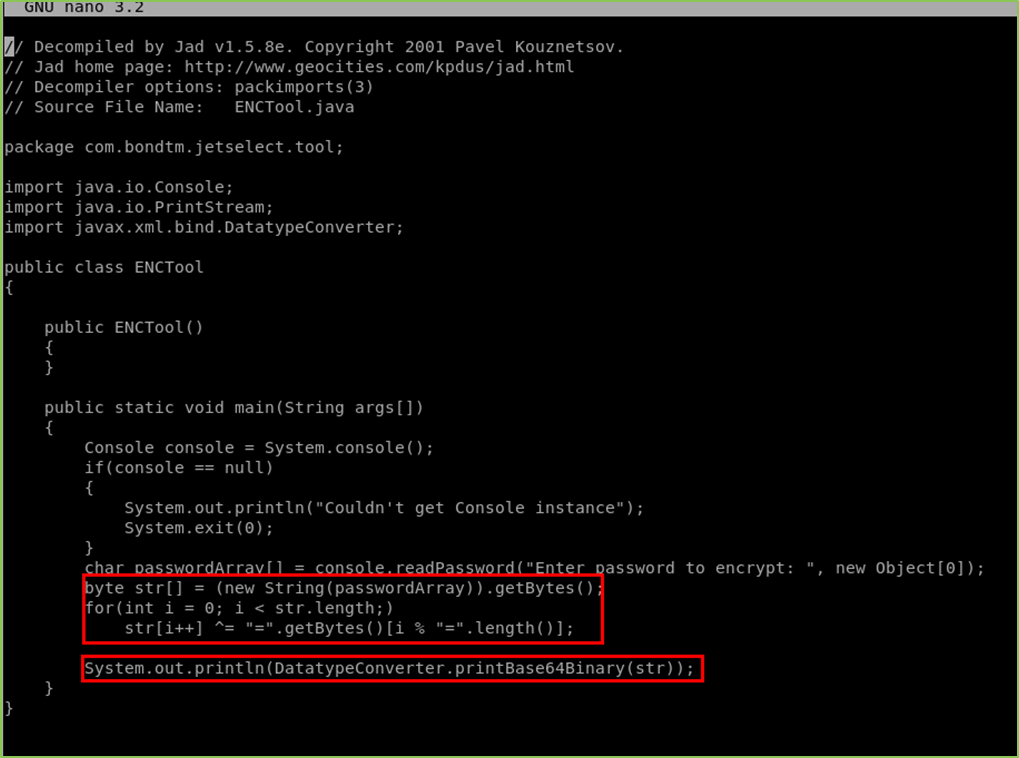 Leveraging this information, it was possible to quickly develop a tool to gain access to the original plaintext input.

Using the code above, it is possible to pass a base64 encoded string obtained from the sfc-general.properties file:

This password can be used to log into the web interface of the application as an Administrator, allowing the amendment of all network segregation rules provided by the application. Additional passwords (for example, MySQL login details) can be found by examining the other files referenced in the 3passchange.sh script mentioned previously.

Examination of an additional installation script within the BondIT home directory named runSQL.sh also revealed MySQL credentials for the root account. After obtaining access to the MySQL database as root, it was simple to obtain usernames and password hashes for all other users in the JetSelect application using the following query:

As these passwords are ‘encrypted’ using the same manner as previously described, it is possible to gain access to all accounts in the application.

Nettitude also discovered that the web interface of the application stored and attempted to obscure sensitive information such as RADIUS secrets and SNMP strings. These values were stored in cleartext in a property called password within the HTML of the web page. As such, it was trivial to obtain the cleartext values of these settings, even as a lower privileged user – for example, the ETO role who is not an Administrative user and who should not have access to this information. 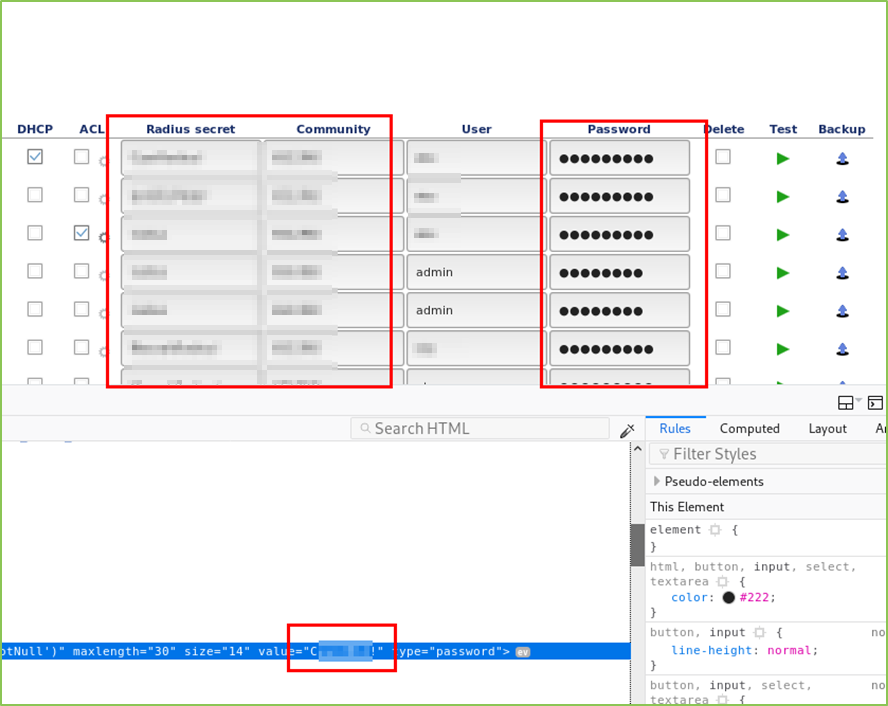 Nettitude did not complete a full assessment of the software as that was not the objective of the engagement; it is possible that other fields within the application suffer from the same issue.

This scenario also serves to highlight the risks that the Marine & Offshore sector can experience in relation to securing both the information technology (IT) and the operational technology (OT) of a vessel. Many vessels are equipped with 24/7 internet connectivity, in effect making the IT not much different to that of a conventional business.

It is critical that vessel operators adopt a cyber security strategy for both their onshore and offshore operations. This should incorporate, as a minimum, a solid patching strategy (supported by a development environment hosted onshore), vulnerability assessment and rolling penetration testing.

Additionally, this case study provides a perfect example of where the OWASP ASVS testing framework can improve assurance levels, as well as ensure that security is included in the development life-cycle of applications and services. If this application was simply tested from a black box web application perspective, two of the vulnerabilities would have gone unnoticed. By combining grey box web application penetration testing with architecture reviews, build reviews, code reviews etc, it is possible to drastically improve the security of an application as a whole.

For more information on the OWASP ASVS framework, please visit:

Thanks to Rob Bone (R2B2) @m0rv4i for his quick PoC to ‘decrypt’ the passwords stored in the application.