You are here: Home / marine & offshore

As part of our research into threats facing the marine and offshore sector, we recently uncovered an ongoing malware campaign.  It makes use of specific maritime industry related document lures, and attempts to evade detection by disguising command and control traffic as traffic to legitimate maritime-related businesses. From our examination of the documents being sent, we assess that it is likely this forms part of a wider malware distribution service that is available for purchase, but with purchasers providing the malware, configuration and targeting information.

This post will detail the specifics of this campaign, showing how it works and how we were able to uncover more information on the organizations it was attempting to impersonate.

The malicious payloads are sent using a set of emails tailored to situations in the maritime industry where vessels send forms by email, often as Microsoft Word files. It is likely this is an attempt to take advantage of employees who are used to dealing with email attachments on a regular basis, and are hence more likely to open them. Some examples of email subjects seen are:

It is worth noting that in all cases care has been taken to construct a plausible email message – for example, in the ‘Vessel Sailing Detail’ email, the three vessels listed are all container ships which could operate as feeder ships, and operate in the locality of the ports listed. Likewise, Xin Da Qiang is a bulk freighter which could be capable of carrying grain.

Each email also has a legitimate email signature which matches what would be expected from that company, although small typos have been introduced into phone numbers and email address to stop them working: 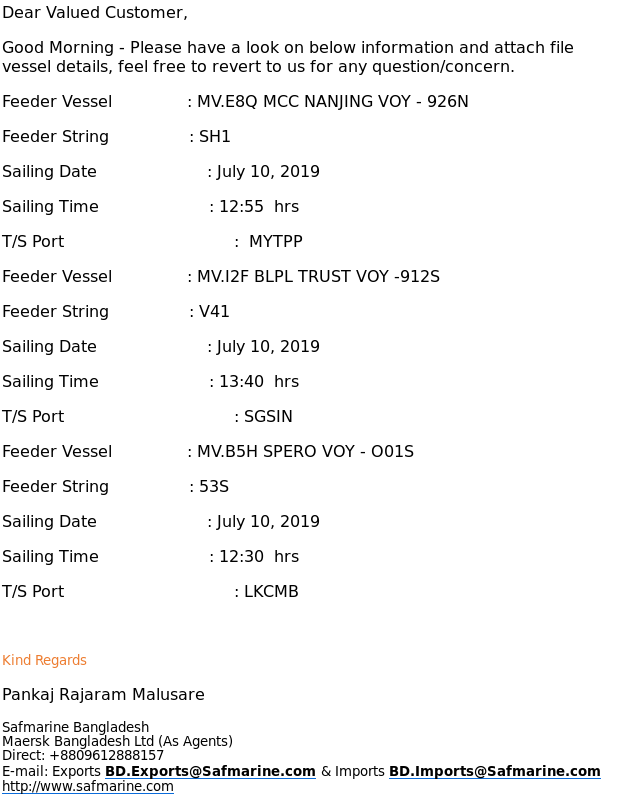 In each case the email attachment is an RTF file named with the .doc extension, which by default will open in Microsoft Word. When opened, the file simply prompts the user to enable editing to see the document, before using CVE-2017-8570 (RTF Composite Moniker vulnerability) to download and execute a payload on the machine.

CVE-2017-8570 has been covered by the original finder, but there were a set of similar OLE vulnerabilities discovered around the same time, and it is worth taking a look at how the RTF file is constructed to specifically exploit CVE-2017-8570, and what it drops onto the system.

Alongside text and images, RTF files can contain Microsoft OLE links and embedded files which are denoted by the \object tag. OLE (Object Linking and Embedding) data structures allow documents to contain objects created by a different application which retain their original format and can be edited with the toolbars and menus from the original application which created it.

The RTF files in this campaign contain two objects of interest; one a package and the other with a class of Word.Document.8.

The structure of the objects embedded in the RTF file is defined by the EmbeddedObject specification, for example the Word.Document.8 object:

The next bytes are the ‘native data’ of the object, and the signature indicated they are a Microsoft Compound File Binary (CFB) file, which is a simplified file-system within a file:

The CFB file contains one sector, which is an OLEStream. It is here that the composite moniker that leads to remote code execution is defined:

When the OLE object is loaded as the RTF file is opened, the composite moniker is bound. This means that IMoniker::BindToObject() is called which finds the object, puts it into the running state and provides a pointer to a specified interface.

As the moniker is a composite moniker, the two parts must first be bound before the pointer is returned to the calling application. Internally the BindToObject() method is called for the ‘New’ moniker, with an argument *pmkToLeft provided as a pointer to the file moniker. This means that before the new object is bound an object is created with a type determined by the extension of the path provided in the file moniker (.sct in this case). From the registry, it’s possible to see a .sct file (scriptletfile – text/scriptlet) corresponds to a CLSID of {06290BD2-48AA-11D2-8432-006008C3FBFC}:

The scriptlet file is included in the RTF file using a Package object. This allows for an arbitrary file to be embedded into the document, and when the document is edited be written into %TEMP%. The scriptlet file is an interpreted COM component containing an XML representation of a script. In this case, it’s a lightly obfuscated Visual Basic script which will download a payload, save it to %APPDATA% and execute it:

In all samples seen, the download URL appeared to be hosted on a wide range of likely compromised infrastructure (e.g. machines exposing RDP or SSH). Interestingly, each executable was named with a date (e.g. EMEH2806.exe, CHIMA0807.exe). This matches the last-modified HTTP header when downloaded, so it appears to be used to track the date the malware was uploaded to the staging server.

The second stage that is delivered varies depending on the theme of the campaign being carried out – for example, other campaigns using exactly the same RTF template and SCT file but with different email lures (e.g. purchase orders or draft contracts) deploy a range of different commercial RATs (AveMaria, AgentTesla, NanoCore, FormBook etc.). However, in the case of the maritime-focused campaign, every different email or sample results in a download of a variant of HawkEye Reborn v9.

HawkEye Reborn is a commodity remote access trojan which is available to purchase on a subscription model. It has been well documented by Talos and these samples are reasonably similar. The assembly is obfuscated (likely with ConfuserX) to make analysis more difficult. When run, the assembly spawns a child process which contains the main applications logic. This child process is stored in the PE resource section encrypted with a simple XOR cipher:

Because the two pseudo-random generators are always seeded with the same values (P_0=-1670293239 and P_1=625367976), we can create the same key sequence and decrypt the resource to obtain the clear-text executable.

This is also heavily obfuscated, this time with SmartAssembly, and so much so that no decompilers are able to successfully process it. Using dynamic analysis, however, it is possible to see that the hawkeye application extracts two Nirsoft utilities (WebBrowser PassView and Mail PassView) from the PE resource section and injects them into vbc.exe. This extracts saved credentials from browsers and email clients and saves them to temporary files on disk. The malware then queries the machine’s IP address using bot.whatismyipaddress.com, before returning any obtained credentials, the machine’s IP address, hostname and currently logged in user via email:

Notably, the malware uses STARTTLS to encrypt the email transmissions, and validates that the SMTP server’s TLS certificate is trusted. The destination email domain was registered to appear similar to a legitimate company (abrancon[.]com -> abracon[.]com), and this gives us a useful insight into the campaign’s infrastructure.

The email domains used for returning machine information and passwords is registered with Openprovider, and is using their shared mail infrastructure. Depending on the hostname provided in the SNI field of the TLS request, the mail server responds with the appropriate certificate. In this case, certificates issued by Let’s Encrypt are being used, and contain a list of SANs including domains being used to impersonate other maritime organisations.

Additionally, each domain also has an entry as a subdomain of penavicohhn[.]com (a misspelling of another large maritime organisation in China). It is unclear why this is (perhaps to help keep track?), but by pivoting on this in certificate transparency logs, examining other samples, and looking at passive DNS records, we were able to build a fuller list of impersonated companies:

One of these domains was also a subdomain of bertlng.com, and pivoting around certificates issued to that domain gives another set of domains registered in much the same way. Again, there is a significant focus on maritime organisations, although in this campaign there also appears to be more targeting of the oil and gas sector:

The use of objclass PacJage to describe the package OLE object in the RTF files stood out, as in many online examples the ‘correct’ term Package is used. On pivoting on that and some other unique strings such as filenames and object dimensions it quickly became apparent that the same RTF file ‘template’ is being used to deliver many different types of trojan, and using many different document lures.

Each lure tended to cluster with a particular family of Trojan (for example, fake purchase orders with Ave Maria), but the only thing that changed in the RTF document was the second stage download URL.

It’s difficult to be certain, but this appears to be indicative of malware distribution being offered as a service, where the ‘purchaser’ provides the Trojan and email content and another party provides the delivery mechanism.

There is evidence that the RTF ‘template’ is continuing to be developed with more recent versions demonstrating additional obfuscation of the VBScript contained within the embedded .sct file (for example Base64 encoding the second stage URL). Despite this other aspects of the RTF file such as the objclass PacJage remains consistent.

There are a large number of hashes associated with the documents and hawkeye samples, so this list is not exhaustive. Samples had generally good anti-virus detection.

Malware hosting locations frequently change, and are often taken down relatively quickly. All URLs seen have been reported to/are present on the URLHaus abuse feed: https://urlhaus.abuse.ch/.

Monitoring for traffic to the mail.<domain> subdomain of the domains in the tables above will detect infected clients. This appears to be an ongoing campaign so it is expected more domains will be added.

The following yara rule will match the RTF file ‘template’ used in the campaigns seen to date with a low false-positive rate: